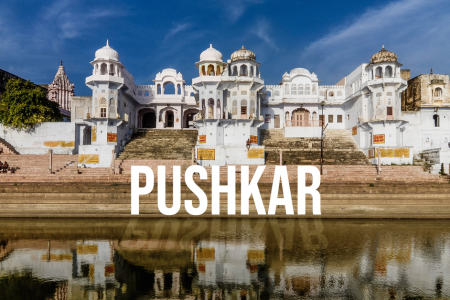 The Sacred Festival, organized annually in Pushkar in the month of  November or December. It is a two-day festival in Pushkar. The celebration takes place at the Jaipur Ghat. Celebrating the rich heritage of Rajasthan with soulful activities, musical retreats, and cultural shows, this festival will surely captivate your imagination. This festivals in Rajasthan aims to celebrate the spirit of creative expression by amalgamating different rejuvenating experiences like music, yoga, meditation etc. One can enjoy musical performances, folk dance shows, heritage walk, wellness sessions etc.

Pushkar Camel Fair is considered as one of the most highly rated  touristic experiences in India amongst the fairs of Rajasthan which is held in Pushkar in the month of  October/November for five days.  It attracts on average more than three hundred thousand people. On display are thousands of camels. Nobody can see these many camels at a single place anywhere in the world. Not only are camels present but there are cattle and horses as well. The fair is being held to remember a unique tradition of livestock trading and it is one of the famous fairs and festivals of Rajasthan.  MatkaPhod, longest moustache, bridal competition, Camel race and aerobics are the main attractions of this fair. Foreigners also take part in a cricket match with the local people.