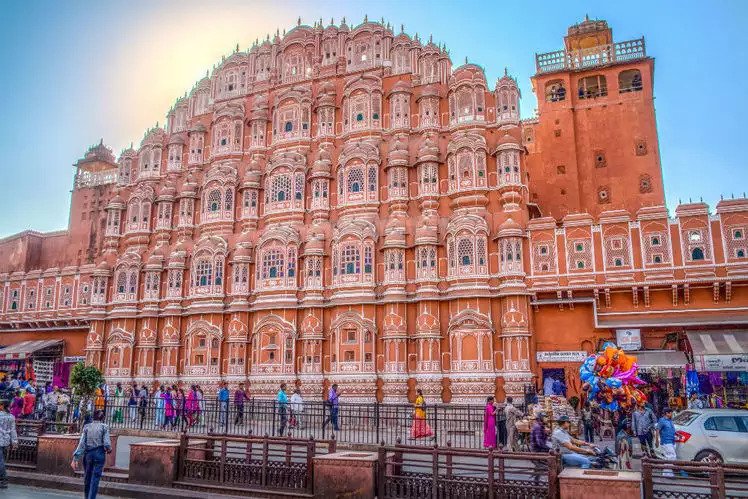 Hawa Mahal or the ‘Palace of Winds’:

Teej Festival which is celebrated in Jaipur in the month of  July-August for One to two days. In this festival married women take blessings of Lord Shiva and Parvati for a happy marital life. Teej is held during monsoon season as it  welcomes the rains in many areas of the desert regions in Rajasthan. A procession of decorated elephants, horses and camels with the fleet lead of Goddess Teej (the incarnation of Parvati) is taken out from Tripoli Gate to Chaugan Stadium and folk music/songs are also played.

Gangaur Festival is celebrated in Jaipur in the month of March/April for 18 Days. During the festival, womens wear  new clothes and  jewelry. A procession takes place during this day starting from Zanani-Deodhi in Rajasthan and concluding at Talkatora. Women make clay idols and on the 7th day of the festival, they break the earthen pots and dispose the pieces into water. The idols are also immersed in water on this day. Ghewar, a typical Rajasthani sweet is widely enjoyed during this festival.

The Elephant Festival which is held in Jaipur in the month of  February/March every year for one day. This is a very popular & major fair and festival of  Jaipur. Lord Ganesha is a popular deity with an elephant head and because of this elephants have a huge significance in the fairs of Rajasthan. One of the most joyous celebrations during the Elephant Festival, a number of competitions is organised. Elephant race, polo, tug of war and elephant decoration are the main attractions.

Jaipur Literature Festival, Rajasthan is often described as one of the greatest literary shows on earth. The Jaipur Literature Festival is an annual literary festival which takes place in the Indian city of Jaipur every January. It is a week-long festival. The Festival is essentially an event of coming together of some of the world's greatest minds, historians, humanitarians, sports people, business leaders and entertainers from all walks of life who share the stage and put forward their ideas and thoughts. The literary extravaganza takes place at Diggi Palace, Jaipur. The popular activities are readings, debates, discussions with the greatest literary thinkers of our time.

Kite Festival of Jaipur is one of the most unique fairs and festivals of Rajasthan celebrated on  14th January, MakarSankranti for one day. The festival is all about flying kites and thousands of colorful kites dot the skies during this time. The occasion is popular in Jaipur and Jodhpur. On this day, people take bath in the Galtaji River and offer their prayers to the Sun God. The existent beauty of the city is accentuated with thousands of kites flying in the sky.Some traditional sweets are made during this time. For instance, Til Ke Laddu is one such delicacy made from sesame seeds.  The Jaipur skyline gets pleasantly dotted with thousands of colourful kites. Almost everyone in the pink city sends their kites into the sky and challenges their opponents on a playful note.

Shri Mahavirji Fair is held in Jaipur in remembrance of Shri Mahavir Swami in the month of March-April for six days. This fair pays tribute to the 24th saint of the Jains & venue is the Mahavirji temple. The main attraction of the fair is the Rath Yatra which is essentially a chariot procession. The pilgrims then congregate at the temple and worship the image of Shri Mahavir Swami & seek the blessings of the divine saint with folded hands. To cater to these pilgrims, temporary shops are setup during the fair where all types of merchandise related to the fair are sold. The image of saint Mahavira is washed in the morning followed by puja and aarti in the evening. Rathyatra is also taken out on this eve and a gran procession follows the chariot to the Gambhiri River bank.